Best rated collection of short funny blonde sayings jokes with one liners and Q&A plus funny images along with some of the funniest videos that are suited for kids as well as adults and appropriate for all type of functions and also good for sharing on internet platforms. 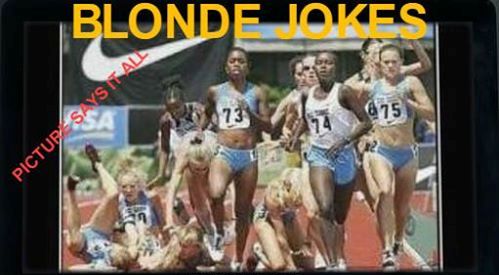 Bacteria - back door of cafeteria

Barium - what doctors do when treatment fails

Benign - what you be after you be eight

Testicles - found on an octopus

Umbilical chord - part of a parachute

Urine - opposite of you're out

D+C - where Washington is

Enema - not a friend 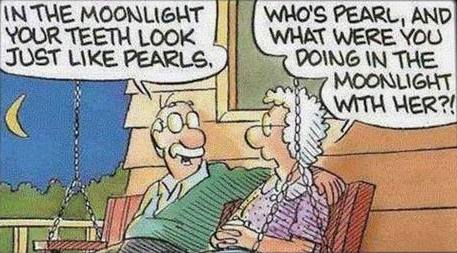 Intense pain - torture in a teepee

Labor pain - got hurt at work

Node - was aware of

Outpatient - person who had fainted

Recovery room - place to do upholstery 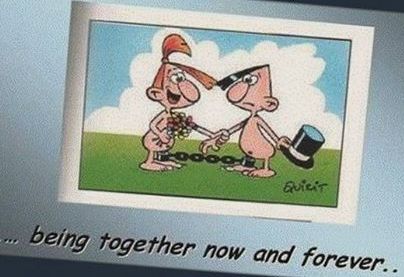 If blondes and bimbos were the same thing, the prefix 'bim' could be used to create new words that describe them:

Bimbabble - noises coming from a group of blondes

Bimbait - short skirts, sheer blouses, string bikinis or other clothing worn by blondes in an attempt to attract the attention of males

Bimbillion? - a blonde giving an estimate of anything

If blondes and bimbos were the same thing, the prefix 'bim' could be used to create new words that describe them:

Bimblaze - the result of a blonde trying to cook

Bimbonese - language spoken by blondes, largely unintelligible to anyone else

Bimboozle - to fool a blonde

Bimbozo - another name for a blonde

Bimboron - a blonde even less intelligent than most other blondes

Bimbrunette - a blonde who dyes her hair brunette, usually to appear smarter than she actually is

Bimburden - blonde carrying too many bags at the mall

A book on how to read

Ejector seat in a helicopter 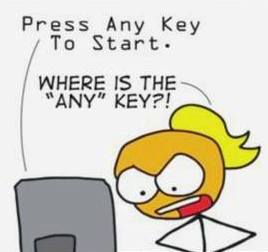 She was so blonde...

She got stabbed in a shoot-out.

She put lipstick on her forehead because she wanted to make up her mind.

She told me to meet her at the corner of 'walk' and 'don't walk'.

She tried to put M&Ms in alphabetical order.

She tried to drown a fish.

She thought a quarterback was a refund.

She got locked in a grocery store and starved to death.

If you gave her a penny for intelligence, you'd get change back.

They had to burn the school down to get her out of third grade.

Under 'education' on her job application, she put 'Hooked On Phonics.'

She tripped over a cordless phone.

She took a ruler to bed to see how long she slept.

At the bottom of the application where it says 'sign here', she put 'Sagittarius.'

She asked for a price docket at the Dollar Store.

If she spoke her mind, she'd probably be speechless.

She studied for a blood test... and failed.

She thought Boyz II Men was a daycare center.

She thought Meow Mix was a record for cats.

She thought she needed a ticket to get on Soul Train.

She sold the car for gas money.

Why did God give blonds 2% more brains than horses? Because he didn't want them pooping in the streets during parades.

What is the difference between a dead blonde in the road, and a dead skunk in the road? There are skid marks in front of the skunk.

What does a blonde owl say? What, what?

What do you call a blonde between two brunettes? A mental block.

Why did the blonde dye her hair brunette? She thought it would help her get a higher score on the SAT.

A bleached blonde and a natural blonde were on top of the Empire State Building. How do you tell them apart? The bleached blonde would never throw bread to the helicopters.

What did the blonde say when she knocked over a Ming vase? "It's OK Daddy, I'm not hurt."

How does a blonde commit suicide? She gathers her clothes into a pile and jumps off.

What did the blonde get on her A.C.T.? Nail polish!

A blond sees a freight train coming and speeds up to beat it across the tracks. The investigator at the scene of the accident wrote on his report, "Some idiot, racing to beat the train, died when he hit the caboose."

Blondes don't worry about flat tires because, as they reason... "Heck, it's only flat on the bottom. If I need to go somewhere, I'll just drive on the top half."

What did the blond say to the physicist? "Why, I just love nuclear fission! What do you use for bait?"

How does a blond kill a fish? He drowns it.

What happens when a blond gets Alzheimer's disease? His I.Q. goes up!

What did the blond name his pet zebra? Spot.

How was the blond killed at the pie eating contest? A cow stepped on his face.

Why didn't the blondes go to the movies on one buck night? They couldn't fit a deer into the car.

A brunette and a blonde are walking along in a park. The brunette says, "Awww, look at the poor dead bird." The blonde stops, looks up, and says, "Where?"

A blonde ordered a pizza and the clerk asked if he should cut it in six or twelve pieces. "Six, please. I could never eat twelve pieces." 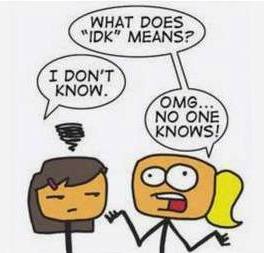 Why did they stop doing the 'wave' at BYU? Too many blondes were drowning.

How do you drown a blond? When he asks for a lifesaver, ask him what flavor he wants.

How does the blonde car pool work? They all meet at work at 7:45.

Why do blonds drive BMWs? Because they can spell it.

What did the blond do when he heard that 90% of accidents occur within five miles of home? He moved ten miles away.

Why did the blonde keep a coat hanger in her back seat? In case she locks the keys in her car.

Why did the blond have tire tread marks on his back? From crawling across the street when the sign said "DON'T WALK."

Why did the blond cross the road? I don't know. Neither did he. Or: He wanted to see the geese because he heard honking!

A dumb blond was bragging about his knowledge of the state capitals. He proudly said, "go ahead, ask me, I know all of them." A redhead said, "O.K., what's the capital of Wisconsin?" The blond replied, "Oh, that's easy - 'W'."

What happened to the blond ice hockey team? They drowned in Spring training.

Why do blondes wash their hair in the sink? That's where you're supposed to wash vegetables!

Did you hear about the blond couple that were found frozen to death in their car at a drive-in movie theater? They went to see "Closed for the Winter."

How do you recognize a blond at a car wash? He's the one on his bike.

What do you call four blondes in a Volkswagon? Far-from-thinkin'.

Why is it good to have a blonde passenger? You can park in the handicap zone.

Why did the blonde drive into the ditch? To turn the blinker off.

What is the difference between a smart blonde and Bigfoot? Bigfoot has been spotted.

What do you call it when a blond guy blows in a blonde girl's ear? A data transfer.

How does a blond measure his I.Q.? He holds a tire gauge to his ear!

Why do blondes stick their heads out the window? To re-fuel.

What do you call ten blondes at the bottom of the pool? Air pockets.

What do you call fifty blondes in a swimming pool? Air bubbles.

What's the difference between the following two sounds: A punctured balloon and a blond with a hole in his head? None.

Did you hear about the blond who went hot air ballooning? He sat too close to the campfire.

A blonde survived in a terrible car-collision on a highway. Surprisingly, her car was an old lemon without even an air-bag. But, she had an air-head.

How do you change a blond's mind? Blow in his ear. 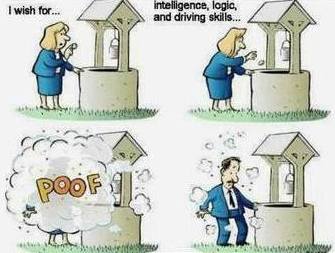 How does a psychic refer to a blonde? Light reading.

How do you confuse a blond? Put him in a round room and tell him to sit in the corner.

How does he confuse you back? He comes out and says he did.

Why did the blonde keep ice cubes in the freezer? To keep the refrigerator cold.

Why did the blond tip-toe past the medicine cabinet? So he wouldn't wake up the sleeping pills.

What do you call a dumb blond behind a steering wheel? An air bag.

What do you call ten blondes standing ear to ear? A wind tunnel.

What do you call a blonde mother-in-law? An air bag.

Why do blondes wear earmuffs? To avoid the draft.

Best rated collection of short funny blonde sayings jokes with one liners and Q&A plus funny images along with some of the funniest videos that are suited for kids as well as adults and appropriate for all type of functions and also good for sharing on internet platforms. Editor.